See below to view the 2022 Little League Age Chart to determine your child's age.

To give the League enough time to create balanced teams and ensure a quality experience including schedule, uniforms and equipment, players who register before evaluations in February (April 1st for Blastball and Mini Minor, because there are no evaluations for these divisions) will be guaranteed a roster spot and we will try to honour team requests. From evaluations onwards, no team requests will be honoured and registration will be dependent on available spots. If teams are full, your child may not be able to play. 8 year old and older players who register after evaluation dates or do not attend evaluations will be placed in the lowest division or tier for their age by default.Uniforms must be returned at the end of the season - failure to do so will incur a $75.00 charge.** A $25 processing fee will be charged for all registration withdrawals*Families who are looking for financial support are encouraged to contact Kidsport TriCities or Jump Start Little League Age Chart 2023 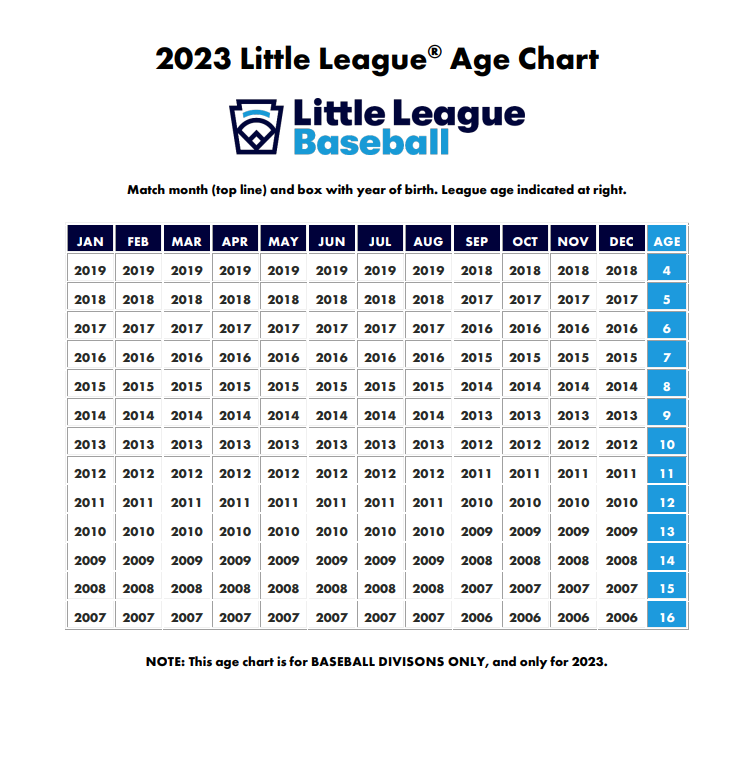 Coquitlam Boundaries
Western Boundary: Starts in the North in the Indian Arm's east cost and travels South to include all of Belcarra and Anmore areas. Through to the coast at just north of Sperling Ave and Hastings Street (as if Sperling carried through to the water). Follows south along Sperling Ave to Lougheed Hwy. Follows Lougheed west to Gaglardi Way. Then south on Gaglardi Way to Hwy 99. Follows Hwy 99 east to Brunette Creek to the Fraser River. Then Follows Brunette Creek to the Fraser River.
Southern Boundary: From the Brunette Creek and the Fraser River (eastside). Follows the rivers edge east to Lougheed Hwy and 287th (Maple Ridge).
Eastern Boundary:Follows 287th North to Stave Falls
Northern Boundary:At Stave Falls follows Hydro Eves West to Salmon Arm just north or Buntzen Lake

The youngest division within Little League is reserved for our 4 and 5 year old superstars who are picking up a baseball for the first time. Returning five year olds have the option of registering in the Blastball or Mini-Minor Division.  Our Blastball program has been developed by a hired early years expert with a focus on a fun, active first exposure to organized sports, and follows Baseball Canada's Long Term Athlete Development Model. Our Blastballers play exclusively at Mackin Field on Wednesday evenings, starting April 2022.

Mini-Minor is the 2nd step in your baseball career… the level that everyone remembers as pitching machine! Players continue to build on their baseball fundamentals with the extra challenge of hitting a moving ball. Defensive skills also come into focus in Mini Minor, as fielders pick up their gloves for the first time and learn to throw and catch like the big guys on TV! Coaches remain on the field throughout the game, taking advantage of key learning opportunities and to provide extra encouragement to everyone! The Mini-Minor division plays at Hartley Field in Mountain View Park. Practice and game nights both start at 6pm.

12 player teams play real games, keeping track of runs and outs. The  emphasis remains on skill development, players learn more of the rules and tactics of the game, and continue to develop their sense of SPORTSMANSHIP and FAIR PLAY in a fun but slightly more competitive setting. We will introduce basic pitching mechanics in practice later in the season, but Slingers will continue to be used in games. Equal play of infield/outfield and rolling over the batting order will ensure that all kids get a comparable number of at bats and innings in the field. All games will be in Coquitlam against other Rookie division teams. Typically Rookie teams will have 2 games and 1 practise per week.

Rookie is also where parents take on even more important roles, scorekeeping, field prep and cleanup, slinger operator, umpire, and best of all, dugout parent, are vital roles on your child's team.

The Minor B division will focus on skill development and a better understanding of baseball. Players and coaches will use the Rookie experience as a foundation to become better baseball players and better athletes. The season will start with the pitching machine (slinger) and pitching will be taught and introduced into games as the season progresses.  Equal play of infield/outfield and rolling over the batting order will ensure that all kids get a comparable number of at bats and innings in the field. All games will be in Coquitlam against other Minor division teams.

Previously called Major A, the Minor A division will follow a similar development model to the Minor B division. Teams will start the season with the pitching machine and pitching will be introduced through the season. This division is designed to give all players in it the opportunity to learn to pitch and have success against kids at a similar skill level. Stealing will also be be gradually introduced at this level. Equal play of infield/outfield and rolling over the batting order will ensure that all kids get a comparable number of at bats and innings in the field. All games will be in Coquitlam against other Minor A teams.

Previous called Major AA, the Major B  division will be made up of similar caliber players. The season will start with pitching and stealing. Practices and games will be more balanced to allow players the opportunity to test what they have practiced with more in game experiences. The batting order will roll over each game to ensure that all players get a comparable number of at bats. Mandatory play in the infield and outfield will also give every player comparable innings in the field. In a typical season, 30% of the games will be outside of Coquitlam against other Little Leagues.

Previously called Major AAA, the Major A division will face competition from around the Lower Mainland. Players will begin to narrow their focus on a few positions where the majority of their in-game time will be. Unlike Major B, the batting order is reset every game based on coach's decision and at bat performance. There is mandatory play at the Major A level but it does not have to be comparable innings in the infield/outfield and there is no guarantee that players will pitch or catch in games.

The CLL Reds program is for players who are looking for baseball opportunities outside of the regular season. Additional practices, tournaments and travel to games against Bantam PBL and Bantam BC Minor teams from around Metro Vancouver give players a more challenging schedule and opportunities to play against players of similar caliber.  In addition CLL has Partnered with the Coquitlam Reds and will be working with the Reds to allow players to practice and play with the PBL Bantam Reds.

*Both programs follows Little League mandatory play rules which ensure that players get a minimum 6 defensive outs and 1 at bat each game. Teams will play a minimum 12 game qualifying schedule against other Little League teams so players are eligible to tryout for summer all star teams.

The Junior House program focuses on skill development and participates in games against teams from other Little League programs around Metro Vancouver. Players are given opportunities to have success at their respective skill level and develop into leadership roles.

The 14-16 year olds play together during the regular season. The regular season begins on April 2nd and runs for 12 weeks. All weekday games/practices begin at 8pm at Blue Mountain Park and end at approximately 10:30pm. Games and Practices vary from week to week but include weeknights and weekends. Games and tournament locations vary from year to year but include Langley, New Westminster, Whalley, North Vancouver, and Vancouver Island.  In order to be eligible for the post season team, selected players must live or go to school within the League boundaries and have played at least 60% of the Regular Season league games.

Evaluations Session 1
Spring 2023 Evaluation will be held at Futbol5 in New Westminster. More details will be sent out in 2023

Evaluations Session 2
Futbol 5
Spring 2023 Evaluation will be held at Futbol5 in New Westminster. More details will be sent out in 2023

Evaluations Session 3
Futbol 5
Spring 2023 Evaluation will be held at Futbol5 in New Westminster. More details will be sent out in 2023

Manage your identity from the palm of your hand to the top of your desk.